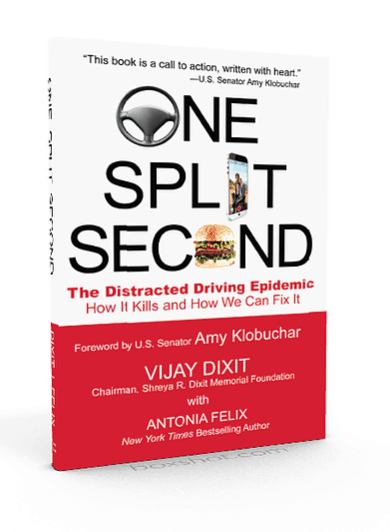 Chris, an electrician, ten-year-member of the Army National Guard, and veteran of the war in Afghanistan, was driving down a rural county highway when he decided to use the time to call his bank. After one glance at his phone he heard a thump and pulled over. He had struck a woman riding her bicycle and pulling her two preschool-age daughters in a bike trailer. The 33-year-old woman, Andrea Boeve, died when the side of Chris’ truck threw her into the ditch. Chris and a man who stopped at the scene tried to save Andrea, but could not. One of the girls was severely injured with broken ribs and a punctured lung, but both girls survived.

Chris pleaded guilty to vehicular manslaughter. From the day of the crash, he has admitted that it was his choice, a bad choice, that caused Andrea’s death and shattered her family. Like so many of us, he ignored the risks and got distracted, never believing he would hurt anyone. “I never thought once it could be me,” he said. “It never crossed my mind. All it took was one time. It was my choice that day. I was raised to be an honest person, so if you make a mistake, you own up to it. If you’re honest, the punishment is not going to be worse than if you lied.”

Chris is serving a 12-month jail sentence that is broken up into three-month periods that will end in 2017. He was also sentenced to three hundred hours of community service and uses that time to talk to students and companies about distracted driving. He also helps the Minnesota State Patrol raise awareness about distracted driving and tells his story in a State Patrol video about distracted driving. Chris says that talking about the crash is tough, but that it is usually easier to talk to high school students than the adults in the companies that invite him to speak. “The students listen better… they seem to care more,” he said. “The young driving age students are more impressionable, and they listen.” A few students always come up to him afterward to thank him, often in tears. They tell him that they understand and appreciate that he is telling his story for their benefit.

Chris has had the most difficult time talking to people he knows, especially people at work. They have been supportive and understanding, but he was frightened about sharing his story with them the first time. “It was always my fear that wherever I go I would be judged,” he said. “It was awkward to tell the guys I work with every day, and to this day it is still hard to talk to them about it.”

Chris speaks to students and groups as often as he can to try to convince them to always make the good choice of focusing on driving. “Right from the get go I knew it was my fault and that I’m the one that could have made a different choice that day,” he said. “Unfortunately, I didn’t. I made the wrong one. My goal is to try to get people to understand and make the right choice.”

Texting while driving raises your crash risk 23 times, according to an 18-month study of truck drivers.

Looking, Doing, Thinking: The Many Types of Distraction

Cell phones and in-dash technology are not the only types of distractions causing this epidemic. Three categories of distraction sum up all the ways we can become impaired while driving: visual, manual, and cognitive (mental). A visual distraction takes your eyes off the road, and this includes looking at your phone to read a text, email, map, or see who is calling; watching your GPS or a video; or looking into your rearview or visor mirror or at your fellow passengers. Visual distractions may also involve non-avoidable situations like poor weather or bright sun. Manual or mechanical distractions include interacting with a cell phone by hand texting, dialing, using a navigation system, and adjusting a radio or any other type of electronic device. As our family learned, a manual distraction also includes reaching for a napkin. Of course, activities like holding a pet, eating, drinking, putting on makeup, and any type of grooming cause manual distraction by loosening a driver’s hold on the steering wheel. The third category, cognitive (mental) distraction, is a complicated mix of visual, manual, and thought processes that hijack the driver’s attention. Having a conversation with co-passengers or with someone on the phone, even when you’re talking hands-free, takes your mind off the road in front of your eyes and creates cognitive distraction.

It is true that individually each of the above distractions can cause a fatal crash, but texting seems to be the most dangerous distraction of all. It involves all three types of distractions: visual, manual, and cognitive.

Here is where we get to the epidemic proportions: during daylight hours on any given day, about 660,000 American drivers are using a cell phone or other electronic device. Every time you reach for the phone, tap a button or punch in a number, or write out a text or email, you are three times more likely to get into a crash.

One of the most surprising facts about talking on a cell phone while driving is that there is no significant difference in the level of distraction between holding the phone and using a hands-free device or system like the car’s Bluetooth connection. Even when handsfree, the mental process of engaging in a conversation is dangerously distracting. Just as surprising is the fact that talking and listening demand different levels of work in the brain. Talking—producing information—requires more brain power than simply listening, and that’s where we get into trouble.

One of the nation’s leading researchers on driver distraction, David Strayer, a professor of psychology at the University of Utah, explained that the brain does not focus on two things at once, but instead switches back and forth between tasks. This switching happens so quickly that we may think we’re multi-tasking, but actually we are task switching. The brain is shifting its attention from one task to another. When the brain is focused on one task, like forming thoughts and language during a conversation, it may not be giving attention to the critical task of monitoring/scanning the road. Strayer designed a brain workload scale that ranges from 1 to 5, and the data from his research suggests that when we try to generate information, to talk, it takes the highest level of workload, category five. Trying to talk on a smartphone or a car audio system, or even to a passenger, forces the brain to throttle back and forth between talking and listening.

If something unexpected happens while you’re talking, you’re not going to be able to respond to it quickly enough. The brain is so preoccupied with processing your talking that it cannot process what is in your visual field, causing ‘inattention blindness.’ A red traffic light or bicyclist may be right in front of you, but you literally do not see it because your brain is focused on the workload of talking. “The attentional network that is responsible for processing what you see around you is doing something else,” Dr. Strayer said. “If you take your eyes off the road to do anything—to read, to dial, to surf the Internet, check stocks, or read newspapers, it causes problems and they start to crop up immediately. The data suggests that eyes off the road for more than 2.5 seconds increases the crash risk.”

David Strayer and Don Fisher of the University of Massachusetts-Amherst developed a model called SPIDER that defines what happens when someone talks on a cell phone while driving. The letters of the word stand for Scan, Predicting, Inattention blindness, poor Decisions, and Execute a Response:

Scan: Scanning is a process of acquiring information to understand where you and others are. When you start to talk on a phone you tend to stare straight ahead more and more, almost like a robot, instead of scanning. You don’t look side to side or at pedestrians.

Predicting: A skilled driver begins to anticipate where hazards might be. If there’s a school bus up ahead I’m going to drive a bit slower, and I scan for pedestrians at crosswalks. Good drivers are aware. Their accumulated skills keep them alert. But when you talk on a cell phone while driving, you stop predicting where hazards might be—you act like a novice driver. You throw away your expertise and ignore possible hazards.

Inattention Blindness: You don’t see what you’re looking at if you’re not paying attention. When you are talking on a cell phone, your brain is focusing its attention on that task instead of processing what you see in front of you.

Poor Decisions: Safe driving is a conscious process. Talking on the phone compromises all the ways a driver makes good decisions.

Execute a Response: Talking on the phone while driving makes reaction times sluggish, delaying them by up to 30 percent, and this increases the risk of crashing. Higher speeds at the point of a crash make the crash more severe.

The mental distractions described in SPIDER reveal how impaired a driver becomes while talking on a cell phone. As Dr. Strayer put it, “You become like Mr. Magoo, driving around without any clue of where you are on the road or what is around you. Then, if you react to something that requires your attention, you’re not going to be able to do it as well.”Research done by Dr. Strayer and others tells us that even the slightest distraction, which reduces our ‘situation awareness,’ or knowing what is happening around us, can lead to poor performance behind the wheel.

Over the past decade, Dr. Strayer’s worldrenowned work has revealed shocking facts about the dangers of distraction. His studies have shown that hands free and handheld cell phone conversations are equally distracting, that ‘inattention blindness’ sets in while talking, that talking on a cell phone makes teenagers and young adults react as slowly as elderly drivers, and that talking on a cell phone behind the wheel is like driving drunk.

The science that reveals the equal dangers of distracted and drunk driving is moving us toward a new mindset about our phones and other devices in our cars. Drunk driving is taboo in our society, thanks to public awareness and tough penalties and enforcement. One day, if we are successful in fostering change, driving distracted will also be taboo. We will look back at these days of talking and texting on our phones while driving as a time of blind and ignorant recklessness. But now that the facts are being heard, the distraction-free-driving movement is well underway.