Families of those killed by distracted drivers listened during a February rally at the State Capitol to drum up support for a law that would ban the use of hand held cellphones and electronics by drivers.

Advocates pushing for a law that would make it illegal to hold a cellphone or other electronic device while driving are waging a last-ditch effort to get a vote on the measure in the closing weeks of the Minnesota legislative session.

“I am angry,” said advocate Vijay Dixit, who lost a daughter in a distracted driving crash in 2007. “Here is a chance to do something with good sense, good governance and do what is right. This is very annoying.”

Dixit, of Eden Prairie, is delivering a letter to Senate Majority Leader Paul Gazelka, R-Nisswa, urging him to bring the proposal out of committee.

Gazelka, who said he’s “neutral” on the proposal but open to the idea, said that while there’s little time left in the session, the bill could still move through committees and to the Senate floor for a full vote.

“We’re trying to decide if it’s the right thing in the days we have left,” he said. Lawmakers must adjourn by May 21.

Gazelka, on Wednesday, launched a poll on his Facebook page (Sen. Paul Gazelka) to gauge interest and people’s opinions on hands-free bill. “I want to hear from you! The legislature is considering a bill that would mandate “hands-free” use of cellphones for drivers. Good idea or no?” the poll question reads.

In the first 16 hours since the question was posed, more than 1,200 people have voted. Many others left comments, a majority in support of the bill.

The full House has not yet voted on the measure, either. It was approved by the House Public Safety Committee and awaits action by the House Ways and Means Committee.

“We need to apply incredible pressure before someone else gets killed,” said Sen. Jim Carlson, D-Eagan, one of the chief sponsors of the measure.

Greg Tikalsky, of New Prague, has been a staunch supporter of the bill since he lost his father, Joe, to a distracted driver in 2015. The high school civics teacher testified this year in both the House and Senate, and has not heard anybody speak against the bill.

“It’s frustrating because I don’t know what the opposition is,” he said. “Until they are personally affected, they won’t listen. I don’t wish that upon anybody.”

In previous testimony, representatives from traffic safety organizations, the Minnesota Trucking Association and the Insurance Federation of Minnesota have called behind-the-wheel cellphone handling a problem that has reached “epidemic” levels. Texting citations climbed nearly 23 percent from 2016 to 2017, with 7,357 drivers ticketed last year, according to the Department of Public Safety.

In Minnesota, distracted driving accounts for one in every four motor vehicle deaths, according to the state Department of Public Safety. From 2012 to 2016, that equated to 59 deaths and 223 serious injuries annually, the DPS said.

Supporters point to studies that show that fatal crashes have dropped in all but one of the 15 states that have enacted hands-free laws, with an average decrease of 16 percent in the two years after the law was passed. Paul Aasen of the Minnesota Safety Council said the data alone should be enough to get the bill passed.

The bill, which has the support of law enforcement and Gov. Mark Dayton, could still make it to the floor, Carlson said. “The families are taking over. They want to get it done.”

Gazelka said support for a hands-free law is picking up speed. “ … Momentum has been growing, and not just this year,” he said. “It seems like we’re getting a little closer every year, and this could be the year.” 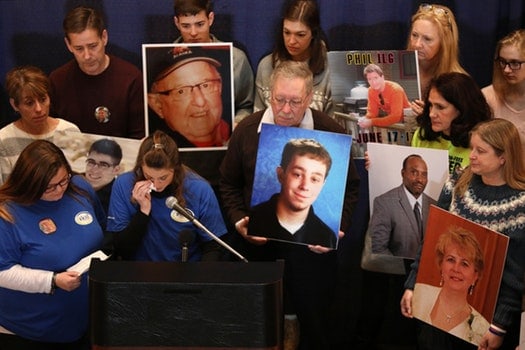