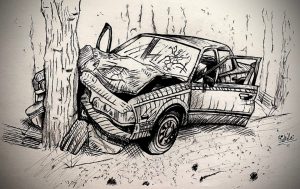 The artist who drew this picture of a car hitting a tree is Michele Garcia Robles, a junior at Chaska High School. She leads that school’s Shreya Foundation’s Distraction-free Life Club. “I had family and friends who got into bad car crashes,” she said. “(The program) stood out because it helped me to bring awareness to my school. We are all becoming young adults and learning how to drive.” (Illustration by Michele Garcia Robles)

While Eden Prairie slept at about 1:40 a.m. on Sept. 5, a resident called 911 after being awakened by the loud noise of racing vehicles near Flying Cloud Drive and Crosstown Circle.

At the end of a chase of one of the vehicles involved, police found it crashed near a residence in Minnetonka. One of its passengers was dead, the other injured. (That person died later that day at the hospital.)

A few days before that, on Aug. 30, the Star Tribune reported a speeding driver hitting a tree on a major thoroughfare in St. Paul, resulting in two fatalities.

He reflected on weekly traffic fatality data published by the Office of Traffic Safety (OTS), a Minnesota Department of Public Safety division.

If this trend continues, one could expect to finish the year passing 400 traffic fatalities in Minnesota.

“Misery loves company,” Langer said, referring to the current situation. “And so, Minnesota is not alone. I always say that doesn’t make it any better. It just tells us we’re not experiencing something different than other states, but something has happened in the past 18 months.”

According to Langer, speeding is only one of the problems. The cumulative effect of alcohol, not wearing seat belts, speeding, and distracted driving all play a role.

“Those four things are what we have focused on for several years in my organization,” he said. “Speed makes impairment, not using a seatbelt, and distraction worse. It’s the only one that makes every other thing worse.”

Historically speaking, Langer said there had been some significant decreases in traffic fatalities over the years.

Then, he said, “things dramatically shifted” in March and April of 2020.

“The COVID pandemic started that trend with reduced congestion, which led to increased speeding,” he said. “The trajectory of traffic safety really changed dramatically with the beginning of the COVID pandemic.”

According to Langer, there were some ongoing “psychological, behavioral issues” related to COVID. That included stay-at-home orders and masked mandates that appeared to manifest other problematic behaviors, he said.

“While the pandemic was starting, we had the massive civil unrest,” he said. “We’re looking at some of the data trends. We’re seeing an incredible drop in traffic enforcement.”

Langer said Hennepin County traffic enforcement citations have dropped to 50 percent in the past 10 years.

He added that drugs are starting to overtake alcohol in some areas as the most prominent impairment substance.

He expressed sadness over current traffic trends. “I don’t think yet that people are paying attention or considering how significant that is,” he said.

For instance, he said the number of homicides in Minneapolis this year is in the news daily. (As of Sept. 8, there have been 62 murders this year in Minneapolis.) Those numbers are high, and the media is justified for highlighting them, he added.

“But we’ve killed more than that in Minnesota on roads, just so far this year than we did the year before,” he said. “And it’s not in the news at all.”

Langer said acceptance of traffic fatalities is the worst it’s ever been in his 22 years with the State Patrol.

“As a society are we literally accepting it and not paying attention to the staggering increase we see?” he asked. “And the impact to people all over the place, it’s really incredible and it’s really sad.”

Langer came back from a regional meeting with state patrol colonels from the Southeast United States.

“It’s a similar story in all those states,” he said. “We’re looking forward to figuring out how we can get our hands around some of these issues. We shared information and ideas. It’s a good network of people.”

Everyone contributes to bad behavior

Langer said every driver or passenger stepping into a car needs to understand the risk of distracted driving.

“It could be a phone, radio, eating, or lost in thought. That is probably the No. 1 distractor,” he said. “We just all need to be aware of it, talking about it, and recognizing a situation where someone is distracted. We say someone, (but) don’t we all contribute?”

He emphasized that when people think it’s “only about phones or it’s only about young people,” that’s not true.

“We always want to blame someone else for their bad behavior instead of accepting that we (all) contribute to that behavior,” he said.

DISCLOSURE: Vijay Dixit is chairman of the Shreya R. Dixit Memorial Foundation, a 501-c-3 non-profit advocating distraction-free driving. He is also a board member of Eden Prairie Local News and a contributor to the site.

“We always want to blame someone else for their bad behavior instead of accepting that we (all) contribute to that behavior.” 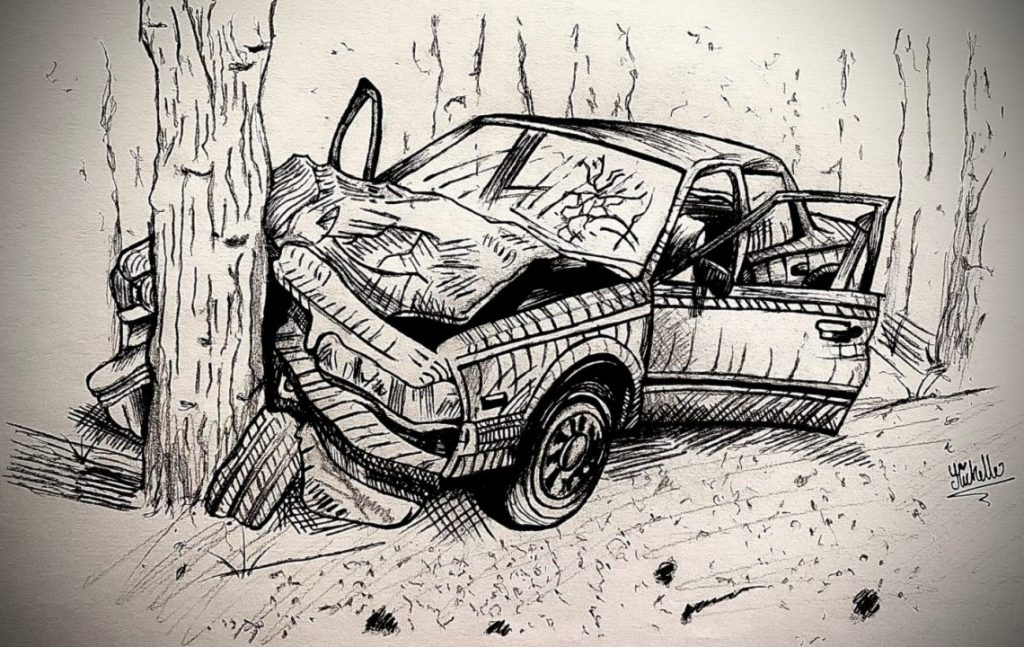