Teens leading by example: The peer-to-peer approach to driving distraction-free

Published in Minnesota Department of Public Safety Blog · May 4, 2017

“The day she died, time came to a standstill.” That’s how Vijay Dixit describes the effect of his daughter Shreya’s death at the hands of a distracted driver. Shreya was a passenger coming home for a visit from UW Madison when the driver reached for a napkin, lost control, and crashed the car. Shreya died on the spot.

Vijay and his wife attended grief counseling, where they were told that “if we didn’t do something positive for ourselves, we’d be in asylums.” So Vijay started talking to AAA Driver School and other drivers’ education classes, anyone who would listen to his message about driving distraction-free. And the Shreya R. Dixit Memorial Foundation was born.

But Vijay soon found that the “trickle-down approach” – telling teens what not to do when driving – might not be the best way to get his message across. He started studying adolescent brain development and found that peer-to-peer influence could be much more effective. Or, as Vijay puts it, “Teens will scoff at parents, but if the same message comes from their peers, they’ll gladly accept it.”

Suvarna Nallamalli, co-leader of the Distraction-Free Driving Club at her high school, shows off the pledge she and dozens of her peers have signed to drive free of distractions.​

Last year, with help from the Dixit Foundation, three high schools in the Twin Cities area started distraction-free driving clubs. This year there were a total of four, and another two are interested in forming clubs next year. These clubs are a great way to use peer pressure in a positive way, explains Vijay: “The research was about drugs and alcohol, but I thought, why can’t I flip it and teach them about the positive things they can learn from each other?” (You can learn more about the clubs in Vijay’s book, “One Split Second,” about the distracted driving epidemic and how we can fix it.)

Suvarna Nallamalli, a co-leader of the Eden Prairie High School Distraction-Free Driving Club, agrees with Vijay’s peer-to-peer approach: “I think it’s a big influence. We’ve always had an adult tell us not to drive distracted. We use phones so much now that only another teenager could understand what a big influence that is on themselves. They’re becoming more and more addictive.”

Suvarna is part of a generation that doesn’t remember life without cell phones, but that didn’t stop her from noticing what a danger they could be. The danger became really clear once Suvarna started learning to drive: “Driving with my friends or an adult, I always saw people driving distracted, but when I started driving myself, I saw these distractions are more prevalent and worse for teens. I wanted to do something to keep other teens safe.” Hence her involvement in the club, whose membership is up to about 25 people this year.

Suvarna’s observations are correct: Distracted driving has become a huge problem, as evidenced by a recent enforcement campaign. From April 10-23, law enforcement statewide cited over a thousand drivers for texting and Web surfing while driving. And in 2016, nearly 6,000 drivers received the same citation, a horrifying 251 percent increase since 2012.

And why teens? Suvarna explains: “If we get the message out to kids now, catching them in an early stage before they get their license, we can help them prevent driving distracted.” The hope is that the more teens who are aware of the problem get out on the road, the fewer distracted driving citations –and deaths – there will be.

Suvarna herself admits she is far from perfect: “Even driving the ten minutes to school, it was hard not to look at my phone.” But her involvement in the club has helped her be much more aware of her habits, as well as their importance to her peers: “I am a leader of this club. I should be a role model. I should lead by example.” 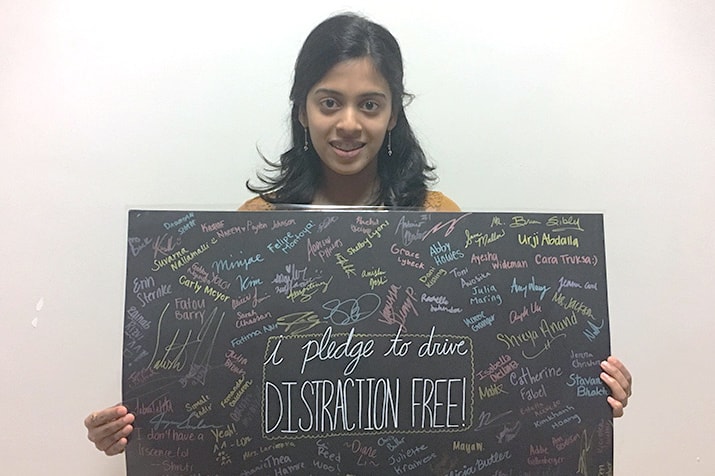